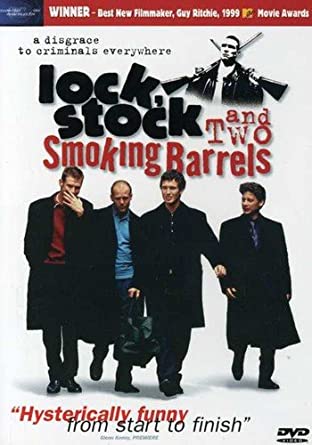 It’s time to go to 1998, in order to revisit a favorite from our childhood! This movie, is an early movie from the famous, Guy Ritchie! It also introduces the world to Vinnie Jones, and Jason Statham, who would go onto create amazing careers for themselves, and THIS is where it got started. We are of course speaking about the film, Lock Stock and Two Smoking Barrels!

“Eddy (Nick Moran) convinces three friends to pool funds for a high-stakes poker game against local crime boss Hatchet Harry (P.H. Moriarty). Harry cheats and Eddy loses, giving him a week to pay back 500,000 pounds or hand over his father’s pub. Desperate, Eddy and his friends wait for their neighbors to rob some drug dealers, then rob the robbers in turn. After both thefts, the number of interested criminal parties increases, with the four friends in dangerously over their heads.”

What happens when you try and cheat your local crime boss? Well, probably nothing but bad things!! From the creative mind of Guy Ritchie, a favorite of the TOTLB team, make sure that you go back and revisit one of our older favorites! If don’t know who Guy Ritchie is, first, weird, but second, go back and see where it all started!!