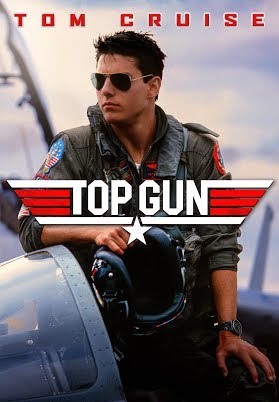 One year before I was born, a young Tom Cruise was thrown into stardom. Now, it’s arguable whether or not this movie was the movie that really shoved him into the clouds of being an actor, but if you don’t think it was the start, you have to admit that it probably did more for his career than most anything up to that point. We’re going all the way back to 1986, to talk about the Tom Cruise film, Top Gun!

“The Top Gun Naval Fighter Weapons School is where the best of the best train to refine their elite flying skills. When hotshot fighter pilot Maverick (Tom Cruise) is sent to the school, his reckless attitude and cocky demeanor put him at odds with the other pilots, especially the cool and collected Iceman (Val Kilmer). But Maverick isn’t only competing to be the top fighter pilot, he’s also fighting for the attention of his beautiful flight instructor, Charlotte Blackwood (Kelly McGillis).”

This is a pretty simple movie, but it is a lot of fun! So much fun that it has such a crazy big fandom. It wasn’t until the sequel came out that we realized how many people really love this original!! This episode tends to stray into some more serious topics other than the movie, but if you haven’t seen this movie somehow, definitely go give it a watch! If for nothing else, give it a watch for the simple entertainment.