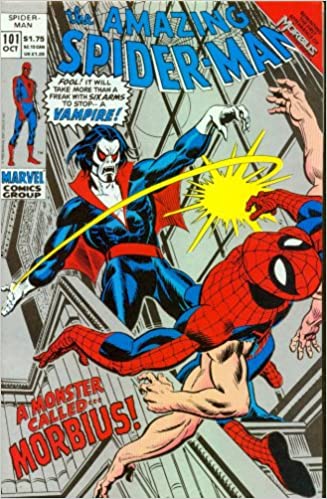 Juan’s biggest comic book collection happens to be Amazing Spider-Man. Not sure why I chose this book to be the series that I wanted to collect, but I did, and it is one of the more successful series of anything that I collect. With only a handful of issues needed between issues 100-300 I can say that I’m a huge fan of Spider-Man. SO, it was fun revisiting ASM for today’s episode!! To tie into what is going on in the world of film, we chose to talk about Amazing Spider-Man 101 and 102, the introduction of Morbius!

“Synopsis for “A Monster Called Morbius!” Peter Parker has grown four extra arms. He realizes that it’s because of the potion he created and took to remove his spider powers so that he could stop being Spider-Man and live a normal life and settle down with Gwen Stacy.”

These two books were from a time when comic books seemed to be a little more simple, so the answers to the books questions were very forced, and easily had. BUT, I think that it was ok during this time. Spider-Man is trying to deal with his powers, and wants them to go away so he can live a simple life. Something goes wrong, and he makes himself grow extra arms. Morbius is introduced who is trying to figure out a cure for his own life ending disease, and chaos ensues. You should definitely take a look back at these two issues, they’re worth the read!