At Comic Con International 2018, we had the amazing opportunity to speak with Rick Remender!

Deadly Class is a comic book that Rick Remender, the writer/creator, debuted in 2014! The comic book revolves around Marcus Lopez, a guy living on the streets, trying to transition into a school of assassins! Up until his decision to enroll in the school of assassins, Marcus has lived a pretty rough life! His parents died in a horrific accident, he was placed in a grueling orphanage, and he has done some horrible things as a response. This book tells the story of his enrollment, plus the lives of his classmates!

In April 2018, SYFY picked up the pilot, to make a series, that will release in 2019! THIS is the reason we had the amazing opportunity to speak with Rick Remender during Comic Con! We get to speak with him about some of his favorite scenes that have already been recorded from the pilot, as well as where he thinks (without spoilers) this first season will take us!! PLUS, not only is Rick Remender writing, and creating the TV series so that it doesn’t go astray, BUT the Russo Brothers are also on board!! Amazing creators, and actors, make this show a MUST see when it debuts in 2019!

Weirdly, but awesome, we also speak about the music that will accompany the TV show, and has accompanied Rick as he created the comic book/TV show! Rick talks about needing to get back to making “Fuck You” music! Essentially, getting back to your roots, going out of your way to make music, or any other creation, that YOU like. Not something that will appease the masses, but rock and roll that goes back to it’s roots! Rick sounds absolutely pumped, and excited for this show to debut, which gives us the feeling that he is all in, and that makes us excited! Sounds like SYFY will have a winner on their hands!! 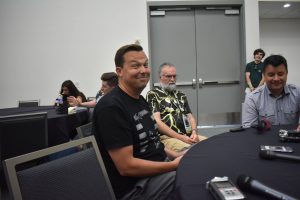