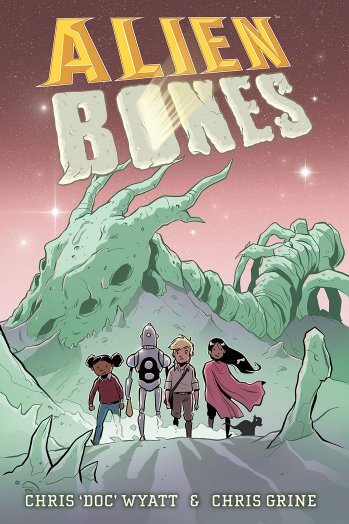 We all know that Dinosaurs at some point, ruled this planet. BUT, have you ever thought about the fact, that maybe, just maybe, they also ruled other planets? What if that T-Rex also existed on Mars, or on some other planet that we have yet to discover? This is the path that, Alien Bones, takes us in! The graphic novel is written by Chris “Doc” Wyatt (Star Wars Resistance and Transformers: Rescue Bots Academy), and is illustrated by Chris Grine.

The graphic novel, out now, coincides with International Dinosaur Month, and is being published by indie publisher, 1First Comics.

Here on Earth, more than a thousand species of dinosaurs have been named and identified. But what about— alien dinosaurs? ALIEN BONES is the story of Liam Mycroft, a ten-year old and his paleontologist father who search for dinosaur bones. When his father goes missing, Liam and his intrepid rag-tag team—his best friend Dianna, his robot Standard-5, his tiny pet dino, plus an unwelcome holographic companion—must travel the universe to find him. In the process, they battle space pirates, escape from the clutches of terrible beasts, and stumble across a massive secret that could impact the entire human race.

“When I was a kid, the idea that there might be other planets out in deep space, beyond our solar system, was widely accepted, but wasn’t yet proven,” said Chris “Doc” Wyatt, the acclaimed television writer and film producer (“Napoleon Dynamite”). “Now I’m a dad and there are literally thousands of exoplanets that’ve been pinpointed. I was inspired to tell the story of ALIEN BONES because I wanted to thrill my son with an adventure that brought together one of his passions—dinosaurs—with a story that inspires wonder and curiosity about the cosmos.”

“Whether you’re a young kid going through a dinosaur stage or a scientist who loves comic book adventure, ALIEN BONES has something for everyone who’s ever dreamt about digging for fossils,” said ALIEN BONES co-creator and artist Chris Grine.