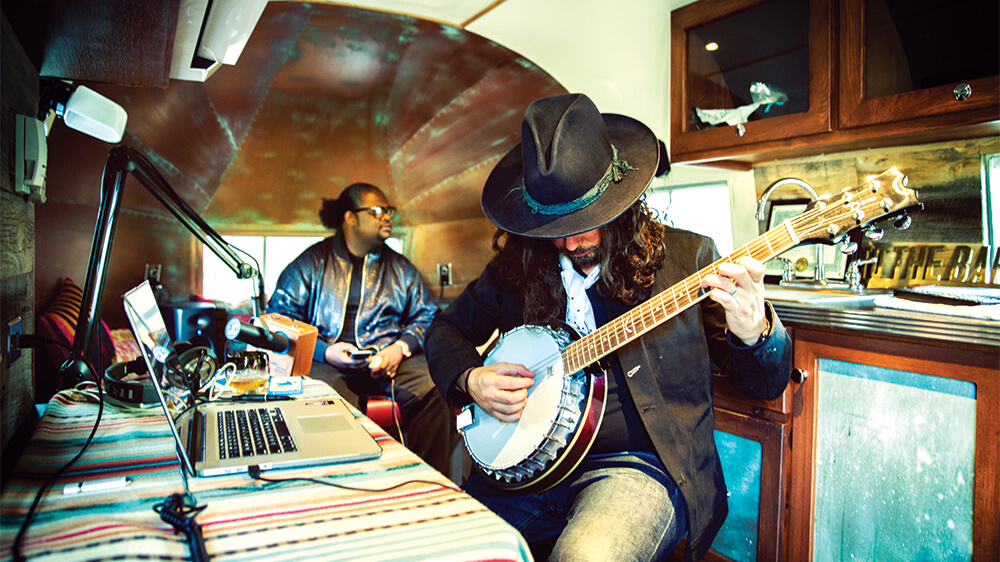 Occasionally we will run across a different podcast, that just sounds super fun, and we think that you all should know about it! The podcast of course, is named, “Bear & A Banjo Podcast.” It’s a fun, new, music podcast, out NOW, via the iHeartPodcast Network!

The Jingle Punks have written and produced the music for the Bear & a Banjo Podcast. It also has an amazing cast! The podcast stars Dennis Quaid (also serving as an executive producer), record/vocal producer and songwriter Jason “Poo Bear” Boyd, Jingle Punks President/CCO “Jingle” Jared Gutstadt, and actress Rosanna Arquette, with music produced by Oscar and Grammy award winning T-Bone Burnett (also an executive producer) and contributed lyrics by music legend Bob Dylan. The Bear and a Banjo band is comprised of Poo Bear on vocals and “Jingle” Jared on the banjo/guitar.

“Bear and a Banjo” is the first musical blockbuster for the podcast medium, and is a fictional anthology series that centers around the unlikely musical partnership between Bear (played by Poo Bear), a mysterious black man whose powerful voice can change hearts, minds, even history, and Banjo (played by Gutstadt), a white guitar player with a mischievous persona. Spanning through time, from the 1930s to the 1970s, each episode places this duo at pivotal moments in American history where they unwittingly influence and define events that would shape the 20th century. From the wrongful conviction of blues legend Leadbelly and card games with Sonny Liston, to the wedding of Sister Rosetta Tharpe and the birth of the CIA, the story will take listeners on a walkthrough of important events through modern history.  The whole series is comprised of 8 episodes, narrated by Quaid who plays a host named “Dr. Q” (kind of like an NPR host) and will include an array of characters, one of which will be played by Rosanna Arquette. Within each episode, a song will be written and performed – to be released via all digital and streaming platforms the same day. By the end of the series, an 8-song album will be made and available for purchase.