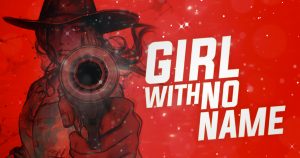 For a few weeks now, we have been getting teased about the comic book derived from the Slamdance award-winning screenplay of the same name currently in development with Legion M and Co-Op Entertainment. As of a few days ago, we finally got all of the information about the book, and the Kickstarter!! As of the writing of this article, the Kickstarter has DESTROYED expectations set at $6,000, and has reached just over $53K!! If this isn’t more proof, that Legion M is working, then you just aren’t paying attention! Here is the story, right from the Kickstarter page:

On the way to a new life on the frontier, a five-year-old GIRL’s parents are murdered by highwaymen. Orphaned, The Girl is taken in by her mysterious UNCLE, an ex-Confederate turned bounty hunter—not a man who ever wanted to raise a child. But The Girl demands he take her in because she knows that he is the man who will make her parents’ killers pay. And they will pay in blood.

Every day, The Girl pushes her Uncle to go after the people who killed “ma and pa.” At the age of ten, her Uncle finally teaches her to shoot. Like him, The Girl is a natural sharpshooter… a crack shot. She has more natural talent with a gun than anyone he has ever seen. It scares the Uncle to think what could become of her if she joined the “killin’ trade.”

As she grows, the bond between them grows, and he begins to see her as his own daughter.  But just when The Uncle is about to hang up his gun for good, a band of outlaws murders him and burns their ranch, leaving The Girl—now 18—for dead in their burning house. But The Girl survives the fire and now, orphaned once again, has only one drive: vengeance. With no one else willing to go after the outlaws, The Girl grabs her gun and takes justice into her own hands. 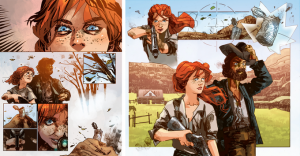 “By bringing the Legion M community to bear (and introducing Girl With No Name to an entire new community on Kickstarter), we hope to demonstrate that there is demand for an original story like this. The more traction we’ve got, the easier it will be to get the attention of the talent, agencies, studios, etc. that can bring this franchise to the big screen!

In addition, we believe that comics are an EXCELLENT way to develop a film—particularly one as heavily stylized (think 300, Kingsmen, or even Sin City) as director Tanya Wexler’s vision for Girl With No Name. There’s no better medium to experiment with visual storytelling than comics, and there’s no better way to do that than by involving the community in the process!”