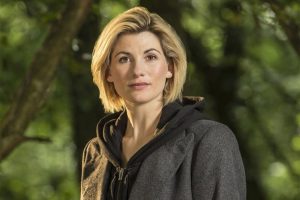 Are you ready for Jodie Whitaker to take on the mantle of the 13th Doctor!? I know that our crew is!! Having the first female take on the role of a Doctor is incredible, and probably should have happened sooner!! With the upcoming series coming soon, here are some figurines, and a clothing line to keep you occupied!

Doctor Who licensee Titan has produced two limited-edition 6.5” vinyl collectibles for the upcoming season: a Thirteenth Doctor TITAN, and a Thirteenth Doctor Kawaii TITAN, both of which will debut at SDCC 2018 in the BBC Shop at BBC AMERICA booth #4129 and at Titan Entertainment booth #5537. 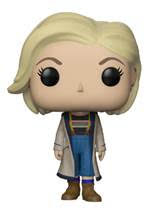 A new Doctor also means new costumes and Her Universe is debuting the Thirteenth Doctor’s fashionable rainbow striped top, long coat, and blue trousers, which will be available at the Her Universe booth #1321 and later in the fall at Hot Topic stores in the U.S.

If you’re going to be in attendance, before/after you purchase your Doctor Who gear, make sure you ALSO hit up the Doctor Who panel! This is going to be happening Thursday, July 19 at 11:45am PT in Hall H!! Along with Jodie Whitaker will be Tosin Cole and Mandip Gill, who play Ryan and Yasmin respectively, as well as award-winning series showrunner Chris Chibnall (Broadchurch) and executive producer Matt Strevens (An Adventure In Space And Time). Do not miss the introduction of the newest Doctor!!