The Goon was one of the very first comic books that I ever read, when I first started getting into the hobby! It was such a great book. It was hilarious, and Eric Powell killed it on the art! Well fear not, as The Goon makes its return next spring! Eric Powell and his publishing company, Albatross Funnybooks, will be putting out never before published stories! This will be the first time in three years that a new The Goon story will hit the shelves, and it will start the year long, 20th Anniversary celebration! There will be a signing tour, Albatross Funnybooks’ collected editions of classic GOON graphic novels, Goon Tiki Mugs, and much much more! 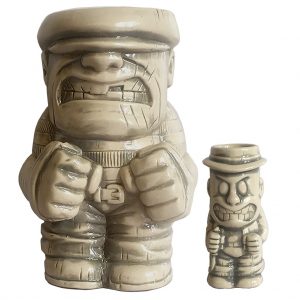 “The fact that we feel confident bringing the full library of my flagship title over to Albatross going into our third year of expansion fills me with excitement and a new enthusiastic energy for what’s to come,” said Powell. “With Albatross, we focus on making fun, eclectic comics that stand out for their individuality and creative quality, as seen in our lineup of titles like HILLBILLY, SPOOK HOUSE, ‘NAMWOLF, GALAKTKON, GRUMBLE and MEGAGHOST. It’s with this idea of keeping the fun in our Funny Books that we are steering this new GOON series. I’m returning to the roots of the series with a heavy emphasis on the weird, twisted humor the book has been known for. The world around us is dark enough right now. I want to make readers laugh and forget their troubles for a little bit. It definitely feels like it’s time for THE GOON.”