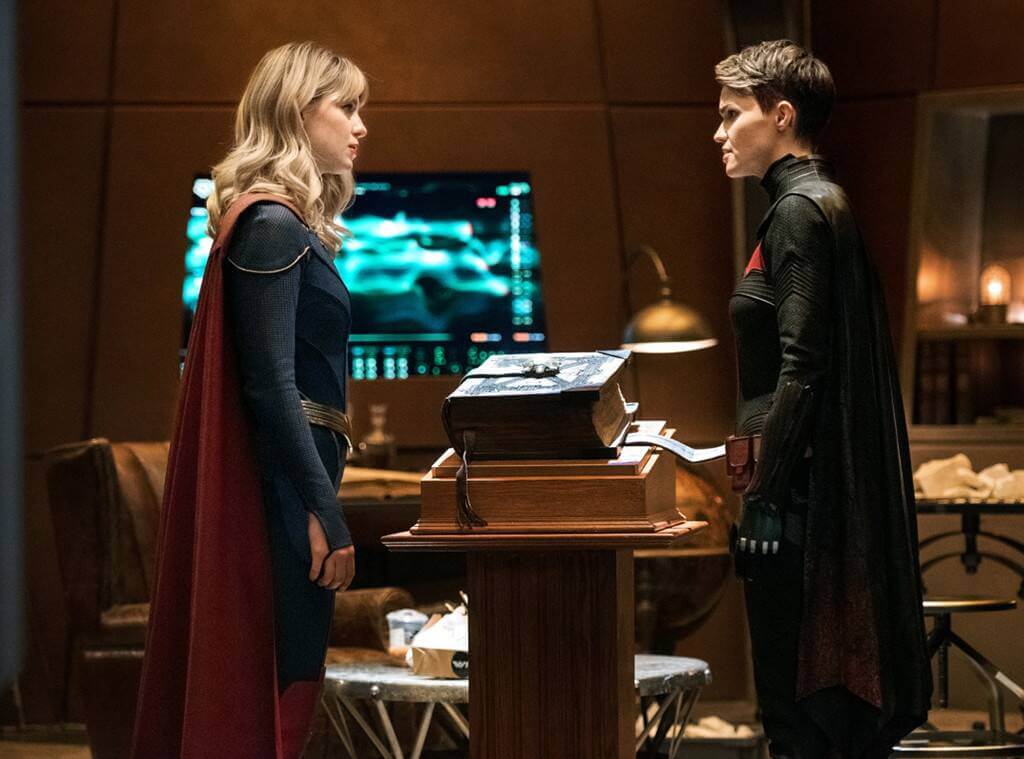 Here we go again!! THIS is honestly something that I look forward to every year, since it started!! Who knew, that when Arrow started, all of those years ago, that it would spawn, what is now known, as the Arrowverse!! This WILL contain spoilers, so if you have not watched Part 1 of the Crisis on Infinite Earths (what is wrong with you), stop reading this, and go watch Supergirl’s first hour. This won’t be a complete step by step walk through of the episode, but I will try and hit on what I thought were some of the most important parts, and will try and compile a list of the Easter eggs that I found, and that I read about.

The beginning of this episode starts off, with The Monitor explaining the multiverse. This gives us “the beginning” of the Crisis. In which many different Earth’s are destroyed. The most important death, that actually will have an effect on the future of the Arrowverse shows, is the death of Alura Zor-El, in Argo City, on Earth 38! At the same moment, the audience is lead to believe that Superman and Lois Lane also die, only to find that The Monitor has saved them, and transported them to a different earth.

Harbinger brings ALL of the heroes that we have come to love, together, pulling them all from their different realities. We have Supergirl, Martian Manhunter, Brainiac, Green Arrow, The Flash, Batwoman, The Atom, Superman, Sara Lance, Mia, and so many other very cool heroes!! This episode has two plots, one that is a major plot point, and one that is more of a subplot.

The subplot, has to do with Superman’s child, Jonathan, who escaped in a pod from Argo City, before the Crisis hit. Sara, Lois, and Brainy travel to Earth 16, where the pod has veered off course, in order to find Jonathan and bring him home with them. There, they find an older Oliver Queen, from that Earth’s year, 2046. He is filled with guilt, over the death of Sara, that happened decades before Sara’s arrival during the Crisis. This gives our “heroes” the opportunity to, not only save the baby Kryptonian, but to also “save” old man Oliver Queen. Sara, in short, is able to remind Oliver, that no matter what version, or different Earth he might be on, he is ALWAYS a good man. It feels pretty heavy, for a smaller plot point.

The major plot of this episode, is the total destruction of Earth 38, the home of Supergirl. With the red clouds covering the Earth, and the Crisis imminent, a “quantum tower” appears out of nowhere, which we are told, is able to stave off the Crisis, for as long as it is working. So, Harbinger brings everyone together, in order to save the tower from attack, by shadow demons, while our heroes try and move as many people as possible, from Earth 38, to Earth 1, which is where The Flash, and Arrow take place. ALL of our heroes battle these shadow demons, and are able to save the destruction of the planet, long enough, to save 3 billion people, out of 7.53 billion people. Which leads to the death that we all knew was coming, but didn’t know was coming this fast in the Crisis.

During the rooftop battle, which was amazing by the way (Arrow shooting, Flash dusting shadow demons, Supergirl & Superman lasering stuff, and The Atom blasting some demons), The Monitor appears and says it’s time to go. The Earth is too far gone, and he transports all of the heroes to Earth 1, WHILE they’re still fighting. Oliver though, always stubborn, finds a way to immobilize The Monitor for long enough to save 1 billion of those 3 billion lives.  “He fought to his last breath, knowing every moment was another life saved… your universe is no more. Of 7.53 billion, only 3 billion souls made it to Earth-1 on the armada of ships. I calculate 1 billion souls survived due to his noble sacrifice.” Even though I knew it was coming, I never thought it would be this early on in the crossover. It was hard, to hold back the tears, when you AND Oliver realized that he’s out of arrows, but it’s not going to stop him from giving his life, to save lives. Listening to everyone, especially Mia give their farewells was so hard, as I knew we were watching the Arrow series die with Oliver. During the farewells, we learn that Periah, is the one responsible for letting out the Anti Monitor, but we have yet to know how.

I’m sure there are WAY more than what I saw, and did a quick reading about, but I’ll try and compile them all at the end of the Crisis!!