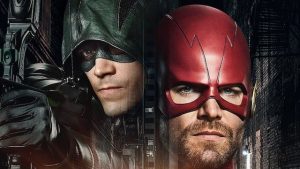 Hey everyone!! The crossover that happens in the DC TV Universe is some of my most fun TV watching time of the year! Last years stepped up in a big way, and I’m excited for what this year will bring us! From the moment that we see The Monitor on the screen, and Earth 90’s The Flash crawling around a battlefield of downed superheros, you’re sucked in. On top of that, we get introduced to John Deegan, who seems to be the secondary villain, and then we don’t see either of them again, until The Monitor makes an appearance towards the end of the episode. I will say that I’m excited for a villain that has the power to shape what is around our heroes, but not necessarily have to interact with them.

Now onto the main bulk of part 1. Oliver waking up and getting a kiss from Iris saying “what if Barry walks in” is funny to us, but helps establish to Oliver and the viewers, that we have no idea what’s going on. The bulk of this episode focuses on that fact. Why have Oliver and Barry been switched, and the rest of the team finally believing that they have indeed been switched. We don’t learn too much about the two big bads of the crossover, instead opting for a throw away villain, AMAZO. Of course the reason is because everyone needs to establish trust between each other, now that Barry and Oliver have been switched, and a throwaway villain helps bring the team together in the end.

Some of my favorite parts of this episode come when Barry & Oliver jump over to Earth 38, to have Kara help them with the situation at hand. Barry & Oliver first meet Superman, and Oliver’s chest puff reaction is hilarious! PLUS, Barry finally gets some “arrow” revenge on Oliver, with some familiarly placed automatic bows!!

For me, one of the most powerful moments of the episode, aside from the time finally pulling it together in the end (of course) was when Cisco finally breached onto Earth 38 and met Superman. Cisco convinces everyone to come back to fight AMAZO, and Kara asks Clark, if he wants to tag along. Cisco, not having ever met Superman of course, asks “who are you” and we get the awesome Superman suit reveal! It was a very cool moment in what could be, in the future, a Justice League that we fans might actually want to see………………….

Overall it was a good start to the event. Of course we don’t really know quite yet what is going on, aside from Oliver and Barry switching places, but of course that’s in the design of a three night Crossover. It was revealed that part 2 will at least partially be in Gotham, with a formal introduction of Batwoman! I’m definitely excited to see the other two parts, and see how this crossover effects Oliver & Barry, personally, as they must try and learn to be like the other, in order for their powers to work correctly!! 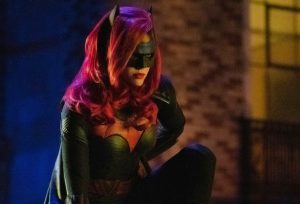