FXhibition is coming back to San Diego Comic Con! You’ll be able to interact with the networks most beloved shows, through art and interactive technology! For the first time, FXhibition will incorporate NFC (near field communication) as part of innovative installations from hit shows such as Legion, American Horror Story, Mayans M.C. and Archer. This is all taking place on the lawn of the Hilton San Diego Bayfront Hotel! 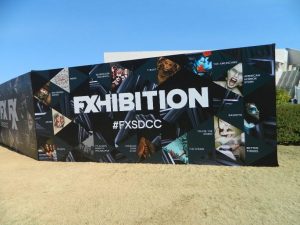 FX’s recent Los Angeles-based pop-up “The LEGION Chamber” art instillation will make its Comic-Con debut, allowing cosplayers the thrilling opportunity to immerse themselves in an audiovisual experience commissioned by the internationally-acclaimed Marco Brambilla Studio. Once inside, participants will find themselves disconnected from the outside world -literally- and fully entrenched in the hypnotic digital realm of David Haller.

Fans will also have the opportunity to step inside the “AMERICAN HORROR STORY Eccentricities Gallery,” featuring a collection of art and oddities inspired by AHS lore. The experience is aided by Augmented Reality (AR) technology, which reveals the secrets behind the objects and clues to the series’ upcoming eighth installment.

Other sharable video and photo opportunities at FXhibition 2018 will include:

For more details, and to figure out how to get yourself an NFC bracelet, make sure that you visit www.FXSDCC.com