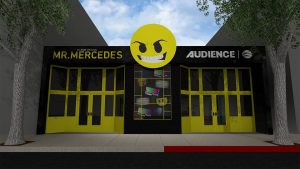 Are you a fan of the Stephen King book/TV series, Mr. Mercedes? Check out what the AT&T Audience network is bringing to San Diego Comic Con, in 2018! You, the fan, will be the first to play the virtual reality escape room game, “Mr. Mercedes: Lair Escape.” Collect clues in the game to win different prizes, as well as never before seen content!

The “Mr. Mercedes Immersive Experience” will include:

“The series picks up a year after Brady Hartsfield’s thwarted attempt to perpetrate a second mass murder in the community of Bridgton, Ohio. Since the incident, Hartsfield has been hospitalized in a vegetative state. Retired Detective Bill Hodges has done his best to move on from his Brady obsession, teaming up with Holly Gibney to open Finders Keepers, a private investigative agency. But when unexplainable occurrences begin to affect hospital staff members attending to Brady, Hodges is haunted by the feeling that Brady is somehow responsible.