Are you a fan of the Teenage Mutant Ninja Turtles, Invader Zim, or Reptar? You are in luck, because Nickelodeon is bringing all of your favorites to their 1,800 square-foot booth! They’ll be bringing these shows to life through a “one-of-a-kind virtual and real-world experiences that will have fans saying, Cowabunga!” Also, look out for the return of Double Dare, the awesome and messy, game show from the 90’s! 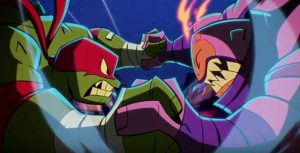 “Select fans have the opportunity to interact with the Teenage Mutant Ninja Turtles in “Rise of the Teenage Mutant Ninja Turtles Live,” a virtual reality experience that immerses users in the Turtles’ iconic New York City world and allows them to have a conversation with Mikey or Donnie—voiced live on the scene by Brandon Mychal Smith and Josh Brener, respectively. More details will be available soon for this off-site opportunity.

The “Rise of the Teenage Mutant Ninja Turtles Live” experience is created by Nickelodeon’s Entertainment Lab, the network’s division that spearheads research and development efforts around new technologies such as virtual reality, mixed-reality, augmented reality and artificial intelligence for Nick and its audience. Nickelodeon’s Entertainment Lab debuted Slime Zone, its first social virtual reality experience at IMAX VR centres globally in 2018, and recently announced a financial investment in Dreamscape Immersive, the location-based VR startup, whereby both entities have committed to produce an experience using Nick’s IP for kids and families.”

All day during the con, at their booth there will be different activities going on, that include, giveaways, character appearances, autograph signing, and more!! Plus, there will be two different panels happening during the show. Make sure you check them out:

Rise of the Teenage Mutant Ninja Turles – Thursday July 19th at 1:45PM in room 6A. This is all about Nickelodeon’s brand new TMNT animated series, joined by new voice cast–Omar Miller as Raph, Ben Schwartz as Leo, Josh Brener as Donnie, Brandon Mychal Smith as Mikey, Kat Graham as April O’Neil, and Eric Bauza as Splinter–along with the co-executive producers Andy Suriano and Ant Ward, and legendary voice director Rob Paulsen. The panel will feature never-before-seen clips from the upcoming series and be moderated by Keely Flaherty (BuzzFeed).