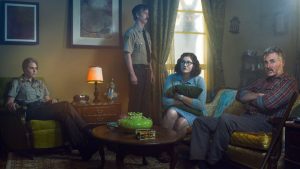 Stan Against Evil, is a comedy horror series, that premiered on the IFC station on October 31st, 2016. In January of 2018, it was announced that it would get it’s third season! Well, the gang is back together for San Diego Comic Con, to talk about their upcoming third season! Join John C. McGinley, Janet Varney, Nate Mooney, Deborah Baker Jr. and Executive Producer Dana Gould share an exclusive sneak peek of the upcoming season of IFC’s horror comedy series Stan Against Evil, followed by a Q&A panel discussion about what lies ahead for the town of Willard’s Mill in Season 3. Genuinely a funny, gory, show, the panel will be a “hell-larious good time.”