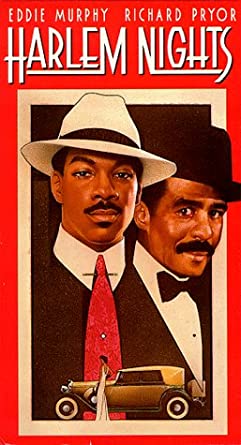 Are you ready to step back in time with us once again? A time where there were mob bosses and crooked cops……well maybe not much has changed. We’re going back to 1989, to talk about a film that was set in the late 1930’s, in Harlem. Of course we’re talking about the Eddie Murphy, and Richard Pryor movie, Harlem Nights.

Things are going bad at Club Sugar Ray. So, Quick & Sugar, decide that it’s time to finally close the doors to the club, and move on to a different city. They hatch a scheme, in order to fake fixing a fight, while they’re able to steal the cities mob boss, of all of his money. During the ruse, chaos erupts. People are dying, and Quick is accused of killing someone, but is of course innocent. The bosses money is stolen, and his heroine is replaced with sugar. It’s a crazy story, revolving around a time of fancy clothes, and fancy cars, when things seemed to be much simpler, and where you could steal a whole ton of money, and just move onto a different ciy.;