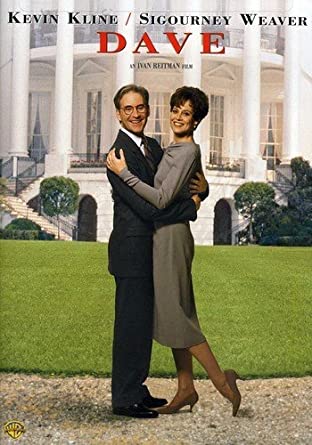 It’s pop culture classic time everyone!! For those of you who don’t know, right now we have two Patreon supporters, who support us at the “Director” tier. What that means, is that they get to choose a pop culture subject every other choice. For this subject, our supporter Jason, chose the president film, Dave.

Dave is a film from the 90’s, that stars Kevin Kline, and Sigourney Weaver. Kevin Kline’s character is the perfect look alike for the current in universe president, and is hired to stand in for the president, for a certain event. In the middle of all of this, the real president has a stroke, and is essentially dead. Now, Dave is set into the middle of a scheme to keep him as president for a while. Sigourney Weaver, plays the president/Dave’s estranged wife. It’s a pretty heartwarming story! Check it out to see if you think it’s worth the watch.