The Mego Corporation was founded in 1954, but turned to doing license action figures in 1971! One of the first action figures was NFL Hall of Famer, Joe Namath. But they didn’t stop there, as they would include characters from the Planet of the Apes, Star Trek, Micronauts, and so much more, boasting over $100 million at its peak!! Unfortunately, in 1983 Mego closed down, bringing an end to what once was one of the greatest action figures makers in existence!!

The great news is, that in 2018, 34 years after originally closing, MEGO IS BACK!! Comic Con International 2018 brought about this awesome news!! With the help of “Broadway Joe” himself, the Mego Corporation announced that they would be returning, with exclusives in Target stores around the country!

We attended the Mego Corporation panel during Comic Con (video above)! We also got to speak with Paul Clark AKA “Doctor Mego.” He is the Mego action figure expert! He can tell you everything you ever want to know about the whole line! PLUS, HE is the person who has been creating Mego parts for over 20 years, on his spare time, AND with the company! He is the perfect person to be “the man behind the scenes.” PLUS, we get to speak with the man himself, Marty Abrams. He has been the man behind the company for pretty much it’s whole inception! You’ll hear him speak about why it’s coming back, why target, and what the plans are for the future!! 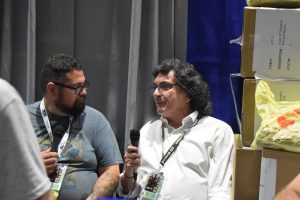 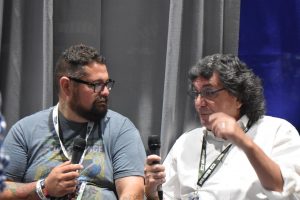