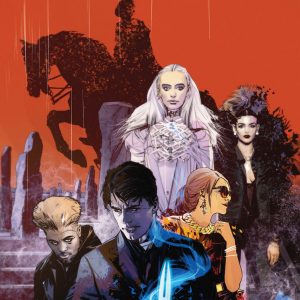 I don’t know about all of you out in the world wide webs, but we here at Thinking Outside the Longbox are big fans of John Barrowman! So, when we heard about this new comic series, starring John, of course we wanted to let everyone know about it! Acursian tells the story of Charlie Stewart (John Barrowman), who becomes the victim of an ancient Celtic curse, on the day before his birthday! Having what seemed to be the perfect life, Charlie now finds his life spiraling out of control, and dooming every relationship that he has created!

Charlie discovers that his own ancestor, made a deal with the Celtic God of War, and THIS is why his life was cursed! Charlie must now battle his way across the world, in order to settle this centuries long squabble, involving his family!

“We began this journey with John, Carole, and Erika over a year ago and are thrilled to see this project coming to fruition in such a gripping story that features—for the first time ever—John starring in his very own comic book, one that truly reflects his love for Celtic lore,” said Robert Napton, Senior Vice President of Legendary Comics.

“Did Robert just say a year ago? We’ve been stewing on this for CENTURIES…,” said co-creators John Barrowman, Carole Barrowman and Erika Lewis. “We’re so excited the world can finally read Acursian. Beni Lobel’s dark, entrenched style seduces from the first panel. Goddesses and gods, fate and time be damned, Charlie Stewart is embarking on a sometimes dangerous—sometimes sexy—sometimes strange and magical quest to get his life back, and you can come along for the ride.”