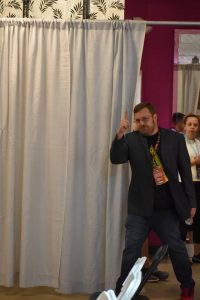 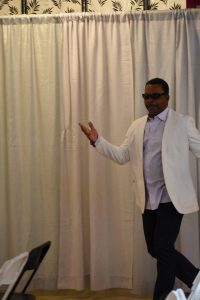 It is hard to deny that Carl Weathers is an icon of pop culture.  From his action roles in Rocky and Predator, to his comedy in Happy Gilmore and Arrested Development, Weathers has been a cultural touchstone for decades.  On the second day of Colorado Springs Comic Con we got to sit in on a panel moderated by Eric Hollis of Bitfaced Podcast. Covering a wide range of his film and television work Weathers was entertaining on all levels. 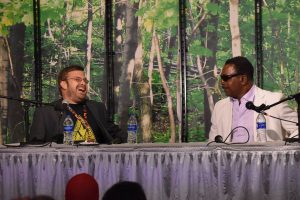 The conversation started with Weathers talking about his time filming Force 10 From Navarrone, a World War II action film that he made with Robert Shaw.  It was a time that he clearly looked back on with fondness. He talked about how much he learned early on his career by filming all over Europe in all kinds of conditions with seasoned professionals.  The things that he learned from Robert Shaw were things that he would hold till this day. 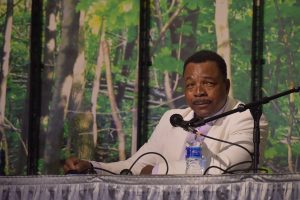 Talking about how he obtained the role of Apollo Creed in Rocky he told the story of how he was playing football at the time.  He saw the opportunity for the role and in the audition was asked if he had any experience boxing. He lied and said that he did, and then went to show off his skills.  Apparently, his boxing was good enough and the rest is history. Twelve-hour days of boxing choreography and running through the scenes repeatedly. It was the kind of dedication and hard work that was needed to make an American film classic. 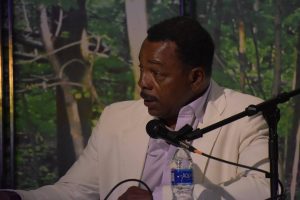 He went on to talk about his work with Adam Sandler on the set of Happy Gilmore.  The kind of silly fun and inside jokes that developed on the set bled into their performances.  The moment when Stubbs teaches Happy how to put was the example he provided. He showed us all how when a man is teaching a woman how to put in a film he comes up behind her and wiggles his hips.  So, he stood to show us how he did the same thing to Sandler, without telling him what he was about to do. The reaction that they got on film was a genuine reaction. 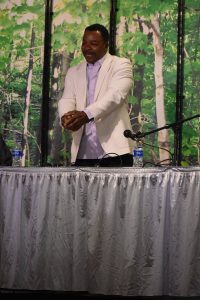 Weathers has made many single episode appearances on television shows, and when he was approached to do Arrested Development he initially declined because he didn’t want to just do a bit part.  Then he had an encounter with a friend that invited him to lunch. Before he could even get out of the house his friend had called him back to also say that he didn’t have any money. Weathers then got the idea for a character that was himself, but the stingiest version of himself possible.  Comedy gold was born as he saves people’s rib bones for stew and jumps onto tabs. 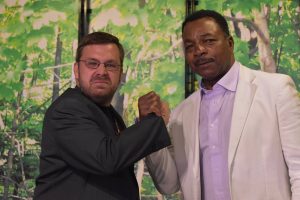 Weathers has and easy humor to him and was very open to talk about any project that he worked on.  He was cheerful and fun to listen to. Be sure to check out the video of the whole panel on our YouTube channel and subscribe.