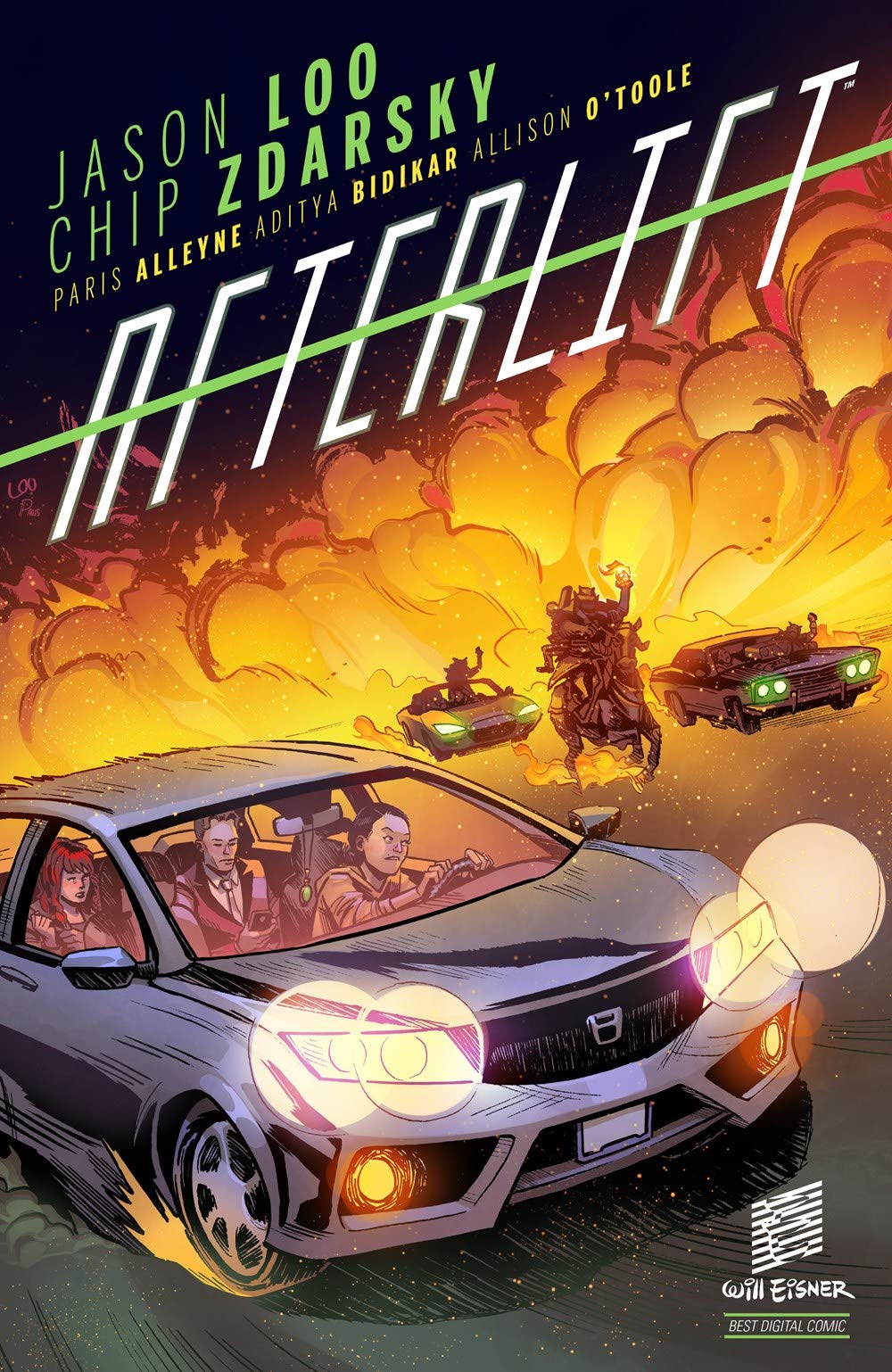 TOTLB readers and comic book fans from around the digital world. In this corner Comixology Original and Will Eisner Award winner for best digital comic. Written by Chip Zdarsky, featuring the art of relative new comer Jason Loo; Dark Horse Comics presents… AFTERLIFT !!!  We only got the one corner really. AFTERLIFT!!! Gives us an inside look at the transportation and delivery of souls, if the souls are going to hell that is. With fantastic writing, art, and color from Paris Alleyne, AFTERLIFT, gives us a passenger seat view of the afterlife. A redemption story and excellently thought-out 100+ page car chase will take our characters from the River Stix to the doors of Heaven itself.

Personally, I love Mythology and different unique looks on things like the afterlife. So AFTERLIFT found itself right inside my wheelhouse. I will say the comic felt a bit choppy to me in a few places, but the pace of the comic however seems very well designed and executed to me. I would love to see a little more world and character development, but that is only because I find myself extremely interested in the world the comic takes place in. Chip Zdarsky is a talented writer and storyteller, and this is just another example of his ability to entertain with his perspective and imagination. Jason Loo’s art, where it can feel a little loose in areas, is incredibly tight in others. This makes me think this is more of a personal style choice and one that personally, I think works very well, the story moves along nicely from panel to panel. I don’t want to get to much into the story because I do not want to spoil anything. The first turn and direction change in the comic happens early so I’ll leave it for you to read and discover on your own. I will say however that most of the comic happens in or around the main characters vehicle making it a kind of character in and of itself. Giving this story a unique vantage point of travel in this world and the next. Personally, I give AFTERLIFT an eight out of ten thumbs up! One of the better one-shot stories I’ve read this year and I would highly recommend to anyone who enjoys unique take on mythology and really cool vehicle art!

I’d love to direct readers to the print edition which arrives in print from Dark Horse next week where it’s available in bookstore, libraries and comic book stores.  February 2 2021, AFTERLIFT [136 pages / color / on sale February 2 in bookstores and everywhere books are sold and February 3 in comic shops / MSRP $19.99/$25.99 pbk / ISBN: 978-1-5067-2440-9] colored by Paris Alleyne, lettered by Aditya Bidikar and edited by Allison O’Toole, includes a Jason Loo Sketchbook with commentary by Chip Zdarsky as well as a process piece called Anatomy of a Page.
A few places to purchase
Amazon
Comic Shop Locator
https://www.comicshoplocator.com/