I usually wake up at like four thirty in the morning to get ready for work, so waking up at 6am Pacific time was a little bit of a treat.  The sky was grey and dreary when I got up this morning, but man did that kind of visual mood pass away as the day went on.

So I’m not going to give you a full rundown of the things that I did today.  There were a lot of interviews and a couple of panels but amongst all of that (that will come out on forthcoming episodes of Thinking Outside the Long Box) were these really big moments.

One of the first things that I did today was go to the From the Bridge panel.  The big takeaway was, “We win.” All those years of getting called a nerd or a geek, of getting beat up because you played D&D, or whatever.  That all paid off, because now we are the ones that are the dominant force for entertainment and pop-culture, and that is kind of a crazy thought. At that panel, Nichelle Nichols was awarded the Inkpot award, which has a list of recipients that is a who’s who of genre work.  This couldn’t go to a more deserving a wonderful person. 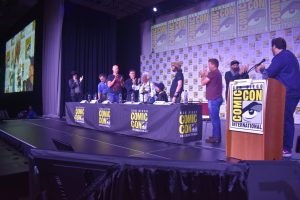 YouTube has some amazing original programing coming out with the shows Impulse and Origin, but at those panels I saw Tom Felton (one of the leads in Origin) take some time out of his day to be an amazing human being.  At the end of his panel a woman in a Rascal holding a Draco Malfoy Pop rode up to the little divider (that I had just been shooed away from) and started calling out “Tom, Tom.” He saw her, and much to his handler’s chagrin came over to sign her pop and chat with her for a second. 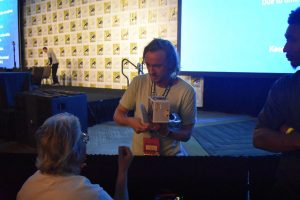 Moments of kindness and humanness aren’t what celebrity are typically known for, but you would (well you probably wouldn’t but the average person would be) amazed how kind celebrity in this world are.

Got a chance to sit (poolside) with Pia Guerra and chat with her about her book of political comics coming out with Image called “Me the People.”  She and I have very similar politics, and it was refreshing to hear that people out there are still pretty angry about the direction this country has taken, but that they still manage to hold out hope that we can right the shit.  What a kind and empathetic person (surprise), Pia was. 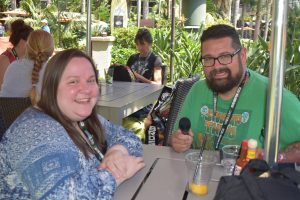 Finally.  I got to sit in on a small press conference with Rick Remender about his upcoming show Deadly Class.  Our readers/listeners will obviously know this as the TV adaptation of Remender’s phenomenal comic book of the same title, and from the sounds of it the show is in good hands at SYFY…his. This conversation was about a lot more though.  It was about music, politics, and how we seem to have lost track of what rock and roll is all about.  It is about doing it all yourself and making music that just says fuck you.

So you have a task today!  Go find your favorite Fuck You music and play it loud.  It’s what Rick Remender would want you to do!