Hello, and welcome comrades. This week on a very special and somewhat Ukrainian edition of Floppy Copy, we discuss Superman… Red Son. That’s right fellow common worker and probably impoverished member of this socialist party, it is time to grab your Ushanka’s, and sharpen those sickles, that’s right fellow communists its hammer time. 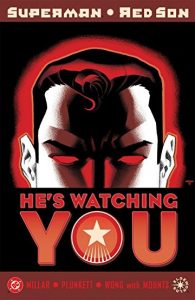 Written in 2003, Mark Millar’s Elseworlds limited series is a 3 part What If story in which Superman is raised in a somewhat unfamiliar setting and time period. No longer american baby Kal-El, baby-El instead crash lands, and is raised in a Ukrainian collective farm. Socialist Super Power, Superman now takes the place of nuclear weapons as the major Cold War deterrent in the 1950’s as America scrambles to find and implement their contingency plan. Red Son spirals into all kinds of cool shit from here, Lex Luther enacting a plan 40+ years in the making alternate versions of DC favorites such as Batman, Wonder Woman, and Green Lantern, this story gives a detailed look at a different world and how our beloved Man of Steel conforms and confronts when raised inside. 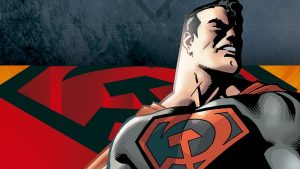 I’ve tried writing more about Superman Red Son, but in the off chance some of you haven’t read it yet, I really don’t wanna spoil anything. Especially the ending, which I have exposed literally none of here. This is one of my all time favorite comic stories period and not Just Superman Stories either. What I love most about Mark Millar’s take on this “what if” story is that Superman’s main character attributes stay relatively unchanged here. This isn’t an entirely different character with major differences to why and how he’s does things. There are simply different motivations and surroundings for this Superman. Time, and a different cultural outlook on leadership and society do produce a difference, however but this Superman is still very recognizable to fans of the character. 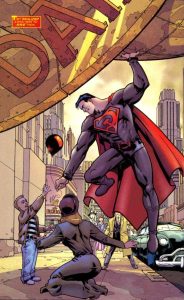 So please do yourself a favor, give Jonthan Garnett a call at Hall of Justice Comics and Collectibles and get yourself a copy of this in either individual issues or trade and read this story. If you haven’t already it is most certainly worth your time. Not guaranteeing he has it in stock but I’m sure he can get the goods!  Also join us this Tuesday night for the Midnight release of Acton Comics #1000 at Hall of Justice and pick up your copy of this milestone in comics. Ten variant covers to collect and one very special comic to win!

How can you win my very own Blank Copy variant of Action Comics #1000 with custom cover art from our one and only Agrovated Artist Tim Huskey, you might be asking, and why would we possibly choose you from the literal tens of people who are probably reading this article?

Well its a little more complex than liking, sharing, or commenting on this post, but I would love it if you would do me that favor as well. This giveaway will require a little more effort on you the reader. WWSD Mother F*cker, probably help out and donate to his favorite local neighborhood charity that’s what… So that’s exactly what I want you to do! Now I know some of us have a little more cheddar than others and can do more in that capacity, but we all can donate a little time, or energy. That’s right get out there and do some good! Donate your time, money, or recognition in the forms of Facebook/twitter/Instagram shares, financial partnership, or hard work to your favorite local charity and then tell us about it in the comments below. You have about 1 month around May 20th I think to get out and do some good as we Celebrate 80 years of the Man of Steel. Winner to be announced on a patreon only video of TOTLB… Surprise twist! That’s right you also have to donate at least 1 dollar one time to TOTLB at Patreon to see the winner announcement and super cool unveiling of the cover! Patreon support not required to win but if you want see us talk about how awesome you are, your charitableness and freaking sweet one of a kind comic on patreon you will have to show your support suckas!