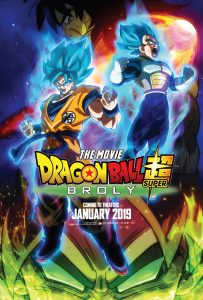 Broly will be the 20th installment in the Dragon Ball franchise, and is based on the story, screenplay and character designs of original creator Akira Toriyama.

As part of the marketing plan, Funimation has become a sponsor of the Dragon Ball North America Tour 2018. This tour will encompass seven cities in the U.S. and Canada and will launch this July at San Diego Comic-Con with a special panel on July 19th that features key contributors to the film as well as celebrity fans.

If you’re a Dragon Ball fan, you don’t want to miss out on the FIRST “Super” movie! “The film will explore the origins of the Saiyans and Frieza. It will also involve the story after the Tournament of Power.”