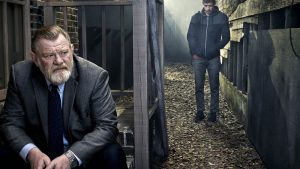 Have you had enough Mr. Mercedes yet? Probably not!! To go along with the announcement of the Mr. Mercedes Immersive Experience, there are now details on the panel that will be happening at San Diego Comic Con! The panel will be held on Thursday, July 19 from 8-9pm PT at the San Diego Convention Center room 7AB!

The second season takes place a year after Brady Hartsfield’s thwarted attempt to perpetrate a second mass murder in the community of Bridgton, Ohio. Since the incident, Hartsfield has been hospitalized in a vegetative state. Retired Detective Bill Hodges has done his best to move on from his Brady obsession, teaming up with Holly Gibney to open Finders Keepers, a private investigative agency. But when unexplainable occurrences begin to affect hospital staff members attending to Brady, Hodges is haunted by the feeling that Brady is somehow responsible.

Make sure you check out season 1 on AT&T AUDIENCE Network which can be found on DIRECTV Ch. 239 and AT&T U-verse Ch. 1114 and via streaming services on DIRECTV NOW, DIRECTV, and AT&T U-verse Apps. We will be doing a sneak peak article into season 2 as well, keep an eye out for that!!