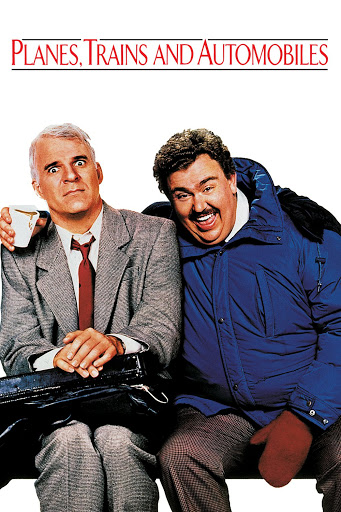 This episode is brought to you by two comedy legends! I know that word is thrown around a little bit too much these days, but honestly, Steve Martin, and John Candy are GIANTS in the industry of comedy. There will always be debates of course, but there is no debating that if there was a comedy hall of fame (maybe there is), these two deserve to be in it! That leads us to the topic of the day, which of course, is Planes, Trains & Automobiles!

Planes, Trains & Automobiles tells the story of Neal (Steve Martin) and Del (John Candy). Neal is trying to get home for Thanksgiving, in order to see his daughter’s performance, and has fallen victim to a MOUNTAIN of bad luck. He can’t get a taxi, planes are being grounded, trains are breaking down, and it’s all pretty hilarious! Neal and Del run into each other at the beginning, and their adventure throughout the movie, is one of the funniest pairings in a comedy, that’s not just over the top drivel. And once you hear the payoff of Del’s character, you’ll be in tears. This is definitely a movie that is worth the watch, if you haven’t watched yet!