My initial sentiments of it all…….WOW, Denver Comic Con 2018 surpassed ALL of my expectations!! Every year for us, I feel is a small step forward, and this year did not disappoint!

First things first. We got the Convention Center back to what it was like two years ago. No more being confused (I’m ALWAYS at least a little directionally confused), as the floor was not backwards. We had our entrance back, which was only a little bit of a wait on the first day, as a lot of the smaller exhibitors hadn’t setup the day before. But overall, I felt like Denver Comic Con was running on all cylinders, as far as the lines, entrances, bag checks, and all of that is concerned, and we were in, in a flash the other two days!! 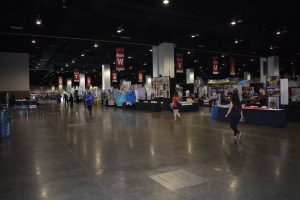 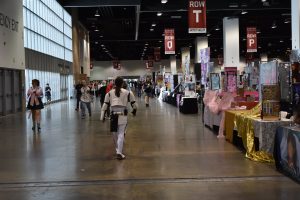 The first day is ALWAYS the daunting one!! Not because of the amount of items on the agenda, as I typically keep the first day light, but because of my nerves about the event, as a whole. Coming into the show, we had about 20 total interviews, and panels, scheduled through the whole weekend. Plus any interviews that would come on the showroom floor, as we walked through. For me, Comic Cons are work, and that is what makes me nervous. Work I don’t get paid for, but is always judged. Mostly by us, but judged none the less, and I want to make sure we put the best product that we can, out for the listeners!

So, getting the first interview out of the way, is always a way to get those nerves out, and just move forward!! That first interview was actually our first surprise of the weekend. About two years ago, we did a #popcultureclassic segment on the movie, Monster Squad. Much to our surprise, we were contacted for an opportunity to interview Andre Gower, and Ryan Lambert, from that movie. We spoke to them about their new documentary, “Wolfmans’ Got Nards.” “A feature film exploring The Monster Squad’s 30-year impact on film and its fan base from script to cult classic” is the tagline for the movie. They were fun, and could have spoken for a LONG time about the documentary! Their screening was well received a the comic con that evening! 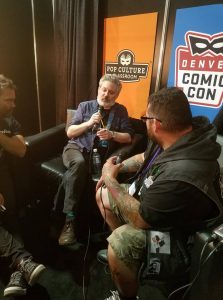 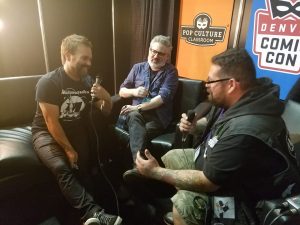 With that first interview done, my nerves were gone, and it was full force moving forward!! For all those friends who tried to stop me through the weekend, I’m sorry to have given you the “hi/bye” at the same time! We always tell ourselves that we are going to catch up with everyone, but the nature of the show sometimes gets in the way! Friday seemed pretty standard for a comic con. It was busy, but you could definitely tell that people were probably still at work, maybe still commuting to the show, etc. The actual busy day, both for the con, and for us, was Saturday!

Saturday was going well, and then something happened at about 10:30am that morning. We were walking into our interview room, to speak with Matty Cardarople, and who was standing in front of us, finishing an interview of his own? None other than legendary “KING of Rock,” DMC, Darryl McDaniels. Audibly, Gabe says, “holy shit, that’s DMC!” To which our press director laughed, and replied, “do you want to interview him?” (surprise number 2) I mean…..what do you say to that, aside from YES! So we arranged that, excited as could be, for later that day.

And then Matty Cardarople walked in. He is honestly, probably like 6 foot 3, or so. But he is soft spoken, and an absolutely hilarious human being. As Gabe is not always the best when it comes to names, he asked Matty how to pronounce his last name. Matty instead, declined to answer, saying that it would “be a thing” for the show, and laughs didn’t stop from there!! You might remember him from, A Series of Unfortunate Events, Selfie, or Dumb and Dumber To, but you’ll never forget his roles in Jurassic World and Stranger Things. He is an actor that, no matter how small his part is, it’s usually one of the funniest parts of the show/movie. 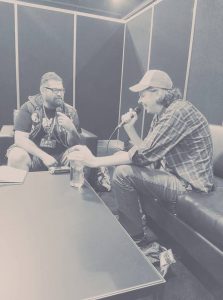 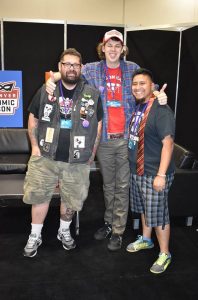 We did awesome interview, after awesome interview on Saturday. From Pamela Ribon, to Gene Ha, Mairghread Scott, Sanya Anwar, and the list goes on and on! Wow, did we get some amazing interviews for our listeners! I got an email during the day, that our DMC interview was moved to a different spot. This would be the third room, that we would interview people inside of. Getting to see the people walking around downstairs on the showroom floor was very different from being on the floor itself. Watching all the people go, getting their autographs, or taking a break, it’s just a different feel, as a spectator. A few minutes before the interview starts, the nerves start to come back! Gabe even says that he might throw up. BUT, the moment DMC sits down on the couch, and the interview begins, instead of being the nervous “camera guy” I become the intrigued, fan. He was hyped, he was full of energy, and most of all, you could FEEL the great vibes coming off of him, and in his words! It truly was one of the best interviews we have EVER done!! 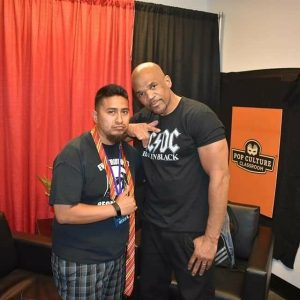 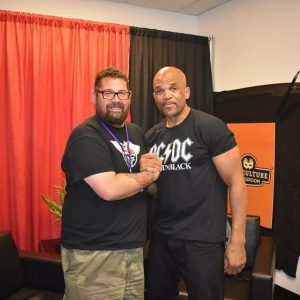 At the end of the day we finished with a panel, which brings me to probably one of our only “complaints” about Denver Comic Con. The panel itself was about Roller Derby, and being someone who knows nothing about the sport, and is not the biggest fan, I wasn’t sure how many people would or wouldn’t show up. BUT, even with a more well known panel going on, we happened to be going on AT THE SAME TIME as John Barrowman. Come on, what panel goer, wouldn’t want to go see the amazing John Barrowman? One of our other panels was situated DIRECTLY across from a Ron Perlman panel. Now, I don’t know what the answer to problems like these are, because I feel like it makes the panelists who are attending panels, opposite MAJOR stars, feel bad, or like the panel shouldn’t even be going on? Maybe less panels all going on at the same time? Maybe not have panels on the same topic, like five times throughout the weekend? I KNOW that the volunteers “grade” each panel as it is happening. The panels are “graded” on how many people attended, did the moderator start/end on time, were there any problems, etc. I assume they have the data to show what we are seeing, but I’m not sure. I hope all who attended panels had much fun though!

Now, onto Sunday’s adventure, which brings us into Surprise number 3! In order to tell this story, I have to tell you two things. One, Gabe took the morning off from the con on Sunday, in order to spend some much needed time with his family at their traditional pride fest celebration! 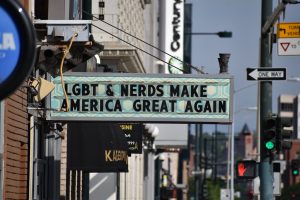 Now for the second thing, I have to backtrack to a moment of worry of mine, on Saturday morning. Saturday morning, before we leave for the Con, we get the opportunity to sit in on a press conference with co-creator of the Teenage Mutant Ninja Turtles, Kevin Eastman! Now, I know that Gabe is going to be gone in the morning when the press conference will take place, but I’m not going to miss out on the awesome opportunity! So we reach out to Kevin Eastman superfan, and friend of the show, Keith Shimabukuro!

So, Sunday morning is here, and it’s time to meet with the famed artist! We are the first of the press corp to show up, so we get seats front and center! This is not a normal event for Keith so, much like Gabe and I yesterday, he is very nervous. But, he does great. He got to ask a question, and hangout with a hero for a while that morning! Many thanks to Keith for stepping up, and helping out some friends. Especially because he volunteers for Denver Comic Con, and could have easily been too busy to help! 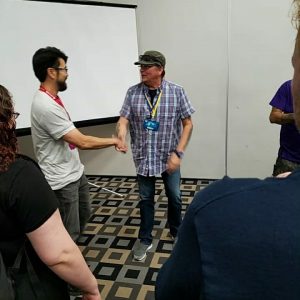 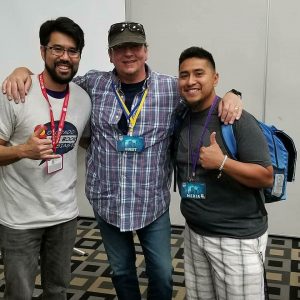 Now, it was time to go have my fun, while Gabe was finishing the last few things of the day/con. Because of the Matt Smith cancellation, my schedule had to be messed with, in order to figure out the substitute photo ops. YES, I go to a “comic con” for photos with celebrities, it’s one of my favorite parts, sorry die hards! For the most part, all of my photo ops were on Sunday. On Saturday I did have the opportunity to take a picture with David Harbour, of Stranger Things fame, and the new Hellboy. Early Sunday I got to meet another actor who sometimes has small parts in movies or TV shows, but they’re show stealers, Sean Gunn. He was super quiet, but it was awesome! My last two photos were Doctor Who heavy!! Originally I had a Matt Smith/David Tennant “team up” photo op! With Matt gone, I still HAD to meet David Tennant. I mean, who the F doesn’t want to meet a Doctor? His face is priceless! Immediately after that, I nailed one down, that was 3 years in the making. The few times I’ve had the opportunity to see/meet/get an autograph from John Barrowman, the stars never aligned! But I got the picture with him AND Billie Piper (Rose)!!!! It was a perfect ending to a damn near perfect comic con!! 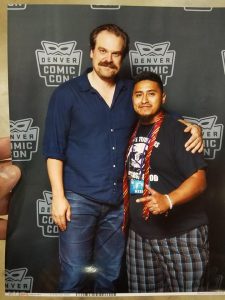 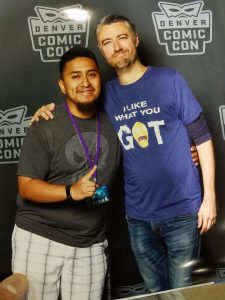 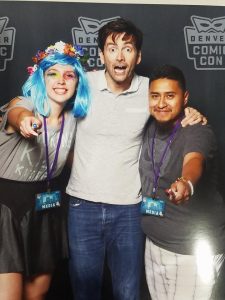 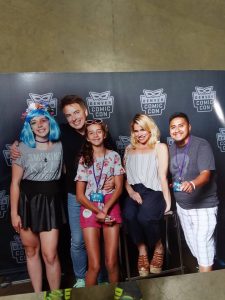 With that, Denver Comic Con is over. It’s crazy to believe that we are almost on our 4th year as a team, our 2nd year as Denver Comic Con Press, and we have been accepted as press to other comic cons as well. Our insane little team has accomplished so much in those 4 years, it’s insane. I’m so very proud of us all. While Jonthan wasn’t with us during the festivities, he was there manning the booth for his very successful comic book store! He’s a great friend, and deserves all his success!! It’s crazy to think that we will be officially covering San Diego Comic Con in one month. The emails for different opportunities have already started to pile up……………….here come the nerves again!