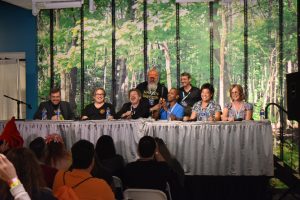 Day two of Colorado Springs Comic Con gave all of us the opportunity to experience something amazing!  We all got to spend some time with a good chunk of the cast of the cult hit Revenge of the Nerds. Members of the panel were Andrew Cassese, Brian Tochi, Curtis Armstrong, Donald Gibb, Julia Montgomery, Larry Scott and Robert Carradine.  Seven people on a stage all moderated by bad ass podcaster hero Eric G. Hollis from BitFaced Podcast, and boy did he start the panel off with a bang. 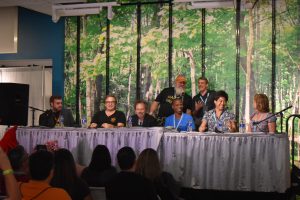 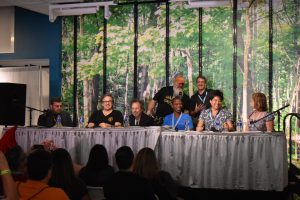 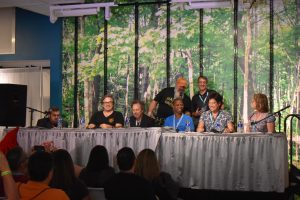 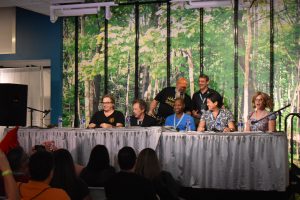 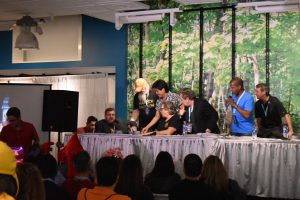 From the crowded stage his chair slid to the edge and slipped right off.  He took a tumble to the floor, hitting the speaker which for a moment wobbled precariously.  First to the scene was “nerd hating” Donald Gibb, quick to offer him a hand up and ask him if he was OK.  The moment couldn’t have been staged better, and with everyone safe and sound it became an ongoing joke for the rest of the day’s panels.  He’s a hero among men to not get so embarrassed that he just quit the panel, but that is the power of nerds! 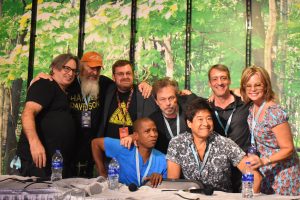 The cast regaled us with stories of the partying that happened on the set of Revenge of the Nerds with Robert Carradine making the statement that they, “Shot the movie in between partying.”  Lots of drinking happened in hotels and off set, and each morning the cast would line up with a medical professional to get their shots of Vitamin B12, so they could function for the day. Donald Gibb of course stayed in his room, “Practicing his lines.” 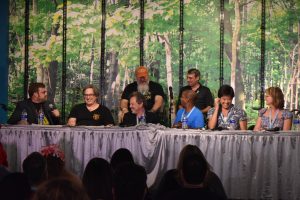 The loose nature of the script dictated that much of what was put to film was unscripted and adlibbed.  Actor Billy Tochi talked of the moment when the jocks shove a jock strap down on his head. The moment wasn’t in the script and was completely unexpected, garnering a reaction from him that was genuine and grossed out, “The least he could have done was wash it first,” he laughed.  Donald Gibb of course spent the time they were adlibbing, “Practicing his lines.” 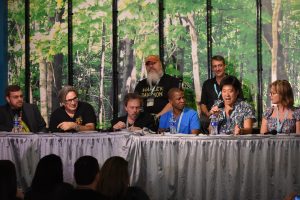 Larry B. Scott who played the black homosexual (truly an oddity in the world of film at that time) lamented the he is in fact not gay, and that it really hurt his game when it came to getting girl on set (and after the movie became popular), but that the role was exactly the kind of role that he wanted to take as a black man.  It was his first chance to challenge himself as an actor, by not have to play a street thug whose only line was, “I’ll cut you!” There was repercussion to the role though, other black guys were excited to see someone playing a different role on scree too but would have preferred more of the leading man type than the gay nerd. Donald Gibb of course had no problem with, “Picking up chicks.” 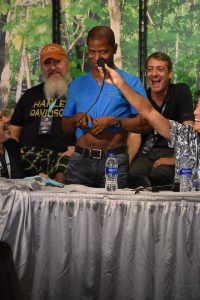 The role of Booger being a pivotal part of the film, actor Curtis Armstrong had a couple of great stories about the film.  The first had to do with the infamous belching contest. When looking for a belch that would be up to the task the sound designers were forced to look to the animal kingdom for the level of noise that they wanted.  A burp was not the noise that they found, instead the belch is a combination of a human burp and a camel having an orgasm. At the time Donald Gibb was busy, “Picking up chicks.” 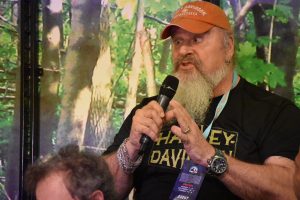 The second tale was about the moment that he realized that the only role that was left in the film was that of Booger, “I’m a classically trained actor, I have done Shakespeare, I will not go on film and belch and pick my nose.  If they call and tell you that they want to offer me the role of Booger, tell them NO!” He then was offered the role of Booger and immediately took the role, “Sometimes you just have to feel like you are in control when you aren’t.” Donald Gibb also was reticent to take the role but he knew he would be able to, “Pick up chicks.” 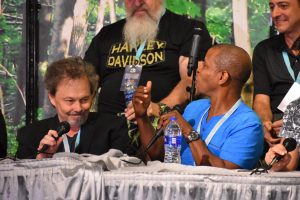 The cast was amazing and truly have a chemistry that has lasted through the years.  All of them talked about how one of the best parts of being in the film was the life long friends that they have made.  That is something that you could see in every moment of the panel. What they created has been a touchstone for nerd culture for years!  Be sure to check out our YouTube channel for the full panel, where you can hear about Donald Gibb, “Practicing his lines and picking up chicks.