Some Time with Team Bestie

It isn’t every day that you get to sit in a room and listen to two icons of professional wrestling chat about their time in the WWE.  Today at Colorado Springs Comic Con we got to sit in a room with two icons and a few of our new friends. Trish Stratus, Amy Dumas (aka Lita), and Amy’s adorable puppy sat down for an intimate panel as Team Bestie.  With a conversation that was well off the rails in a few minutes and ranged from Tigger impressions to the time Amy “saved Trish’s life”. 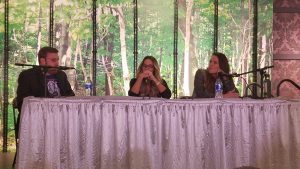 First off, the timing of the panel was weird.  It started at the very opening of the con, and with the structure of the con’s space (which is in a mall) made finding the space for the panel a little hard to find.  As consequence by time the panel had started there were very few people in the room, but no matter, Trish and Amy got a rousing response when they came into the room. 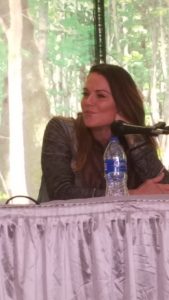 Because it was so sparsely attended at first Trish and Amy felt comfortable to joke and talk about the fun that they had at the convention last year with a guy that they had met the year before.  He was funny and regaled us with his Alex Trebek, and Tigger impressions. Then we all got chance to ask questions. 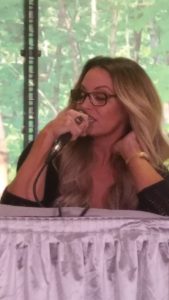 Trish and Lita told us about their time in the WWE and how they feel they fit into the picture as some of the trail blazers of women’s wrestling in the modern era.  When asked how they felt about the WWE’s rules on men and women not fighting each other in the same way that they do on some of the indie promotions, they were both quick to remind us that in their time they were going toe to toe with the male wrestlers.

When an audience member asked if they would ever be on the show Total Divas (or if they ever had been for that matter) they mentioned something interesting about the show.  They have been told that the viewership of Total Divas is largely made up of non-wrestling fans. As far as being on the show, it sounds like they are just going to stick with wrestling.

Trish even regaled us with the story of the time Amy saved her life.  After defeating Stacy Keibler and Torrie Wilson during the WCW/WWF Invasion angle, Trish was backing up the V shaped ramp back into the locker rooms when she stepped back into a void where the two ramps met.  As she was falling Amy caught her by the elbow and rescued here from embarrassment and possibly death as Trish says (it all takes place at about 11:30 in the video below).

Their excitement for their upcoming matches coming on the WWe’s first all-female Pay Per View Evolution is palpable.  Stratus even talked about how she found out in the moment that she would be facing Alexa Bliss.  That when it was announced on Raw, her surprise was genuine. Her and Amy talked about how nervous they were to be in the pay per view to which the audience chanted, “You Still Got It!” 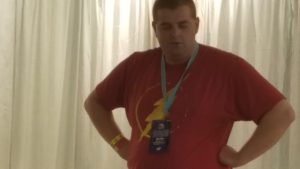 They do still got it!  From The Attitude Era until the first all-women’s pay per view on WWE; Trish Stratus and Amy Dumas have been there through it all, and hopefully they will be there through a whole lot more!