Like Goonies but fucking terrifying.
-Albie  TOTLB.com
I went into this movie with having read the first few chapters into the book and having vague memories of the mini-series I watched as a kid to see Harry Anderson and not liking it too much…
I had stayed away from spoilers but was curious to see the film being a fan of The Castle Rock TV Podcast and to enjoy their episode 5, I needed to see this film.
Spoilers ahead…
I was pleasantly surprised. The opening of the film is a direct lift from the novel and I thought to myself, “Okay, I heard the book was good, so let’s do this.” Then I noticed Gorgie wearing a sweatshirt I had as a kid in the 1980’s. With quick and dirty math done in my head while golden flavored oil leaked out of my popcorn bag onto my tan shorts, I realized the Losers’ Club were my age in that time period. That change of period made me feel all warm and fuzzy inside. Like Ready Player One did, with all the nostalgia, it really helped me to feel I was there. I remembered how I felt then, I was sucked in. That really helped me enjoy the film. All the boring stuff from the mini-series seemed to not be present. I wondered how they would take such a long novel and make it into a movie that runs 2 hrs and 15 mins. Turns out this is just Chapter One, with a Chapter Two to follow the adventures of the older adult Losers’ Club.
I put myself into the role of Jeremy Ray Taylor’s character Ben (New Kid) Hanscom. I liked NKTOB myself, and much like the fat kid from Stand By Me, that was me as a kid. I’m told I wasn’t fat as a kid, but that’s another article. When Beverly Marsh (Sophia Lillis) took the time, just after being bullied herself to be kind to Ben and sign his empty yearbook, the 12-year-old me, fell in love with the idea of someone being kind to me like that at that age.

That’s where I think this story excels, It’s for adults but features amazing teen actors. It is spot on with the 80’s kids movies when we were growing up and it was okay to frighten kids. For a couple of hours, I was young again and scared shitless. It was a fun romp, frightening, exciting, horrible, funny, and sweet all at the same time.
As a newcomer really to the King verse, entering with 11.22.63, I still was able to see things sprinkled in from other King stories, that was a fun game I won’t spoil for you, play the home game yourself.
The only dings in the polish that stood out to me were bad wigs (spend the extra money people), Molly Atkinson (Eddie’s mom) in a sad excuse for a fat suit, it was like big clothes stuffed with plastic shopping bags, I just didn’t get that, and that fucking CGI paper boat. It’s a paper boat. A paper boat. Paper boat. Don’t let these things dissuade you, It is a must-see movie.
All of the Losers’ Club are phenomenal actors,  If I had to choose the best of the best, I’d have to go with Sophia Lillis (Beverly), Chosen Jacobs (Mike), and Jeremy Ray Taylor (Ben) I’m a fan. 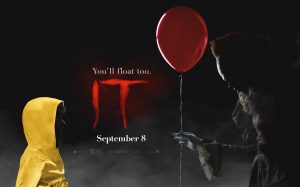