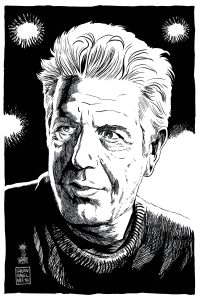 While the world is still mourning after the passing of LEGEND Anthony Bourdain, coming in October, the final graphic novel of Hungry Ghosts will be published by Dark Horse Comics.

Hungry Ghosts “reunites the bestselling writer, chef, and award winning television host with accomplished co-writer Joel Rose, his friend and longtime collaborator, for a series of horror stories inspired by the popular Japanese Edo period parlour game of Hyakumonogatari Kaidankai. The graphic novel substitutes chefs in place of the traditional samurai, and transforms the classic stories of yokai, yorei, and obake by adding a common thread: food is central to each bone-chilling tale.  On a dark, eerie night a Russian oligarch dares a circle of international chefs to play the Samurai game of 100 Candles—where each storyteller blows out a candle after telling a terrifying tale of ghosts, demons and unspeakable beings, praying to survive the challenge.”

The full color, 128 page novel, will go on sale October 2nd!! So in a matter of seven days, you will be able to enjoy this amazing hardcover book! It will feature:

·  An extended dedication and beautiful send off to Bourdain written by Rose;

·  The Real Ghosts, a handy guide to the legendary spirits behind the terrifying tales, written by Rose, with illustrations by Leonardo Manco;

·  A reunion for Bourdain and Rose with legendary comic book editor Karen Berger — the editor of Dark Horse Comics’ imprint Berger Books and recent inductee into the Will Eisner Comic Industry Awards Hall of Fame — who was the founding editor of Vertigo Comics, which published Bourdain and Rose’s graphic novel debut, the New York Times #1 bestseller, Get Jiro!

Above all else, Anthony Bourdain was a writer. He wrote 14 different books, with a few more in progress at the time of his passing, and spend decades writing and starring in television!

“We hope you’ll celebrate Anthony Bourdain, and his love of story and food, by devouring this book. ” 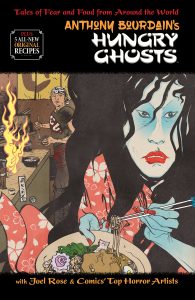