Week to week we receive emails from comic book companies and other pop culture venues. Taking those we present you with the things that we think will be the most interesting to you the listeners. If you have any news or announcements that you would like to share with Thinking Outside the Longbox shoot us an email at: outsidethelongbox@gmail.com

Oh man is it good to not have so much shit going on that I can’t get to these articles. Sitting in front of the computer to get a chance to write about the things that I love sounds like an excellent way to spend my lunch break at work so with no further ado here are some things that are On The Horizon

Holy fuck yes! While Defenders was a bit of a dud, and I still haven’t gotten around to watching The Punisher or season two of Jessica Jones, I’ll tell you right now that on June 22 when season two of Luke Cage drops I will be smoking a bowl setting up some snacks and watching the shit out of this. The more I think on it the more I feel like this is my favorite of all of the Marvel Netflix show and I can’t wait. I hope the music, action and story are just as good as they were in the first season. Speaking of music, do yourself a favor and find the Luke Cage playlist on Spotify. You know what, fuck that, here it is (https://open.spotify.com/user/g0u1d1e1/playlist/6CdBcKJ5vXXkWJfmC45kqB).

In August Matt Kindt and Tyler Jenkins, the Eisner Nominated team behind Grass Kings will be coming out with a new title called Black Badge. Black Badge revolves around a covert and elite boy scout troop tasked by the government with going on actual covert scouting missions:

“I’m super excited to be teaming with Tyler and Hilary on a new project after the amazing run we had on Grass Kings,” said Matt Kindt. “BLACK BADGE is an idea I’d had for a long time — ‘Boy Scouts — but for real.’ Sending them on real scouting missions and into danger. It’s an idea that started out as a joke with me complaining about how the scouts never really scout. But now that I’m writing the series — I’m realizing the deeper and (sometimes) horrible consequences of sending these kids out on missions. It’s going to be funny, emotional, and horrific — sometimes all on one page.” 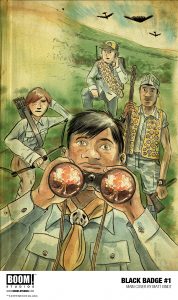 “Well, truthfully, I can’t even find words to express my happiness at working with Matt again,” said Tyler Jenkins. “And this new series, BLACK BADGE, is another vehicle for us to tackle subjects and ideas that mean something to us. After the unrelenting darkness of Grass Kings, I am very excited to explore a completely different world…a world with a tad more levity. This is going to be an adventure. A wild adventure. But it’s gonna get real, so hang on!”

Black Badge starts coming out in August from Boom! Studios and will be available from your local comic shop, including Hall of Justice Comics and Collectibles in Parker, CO.